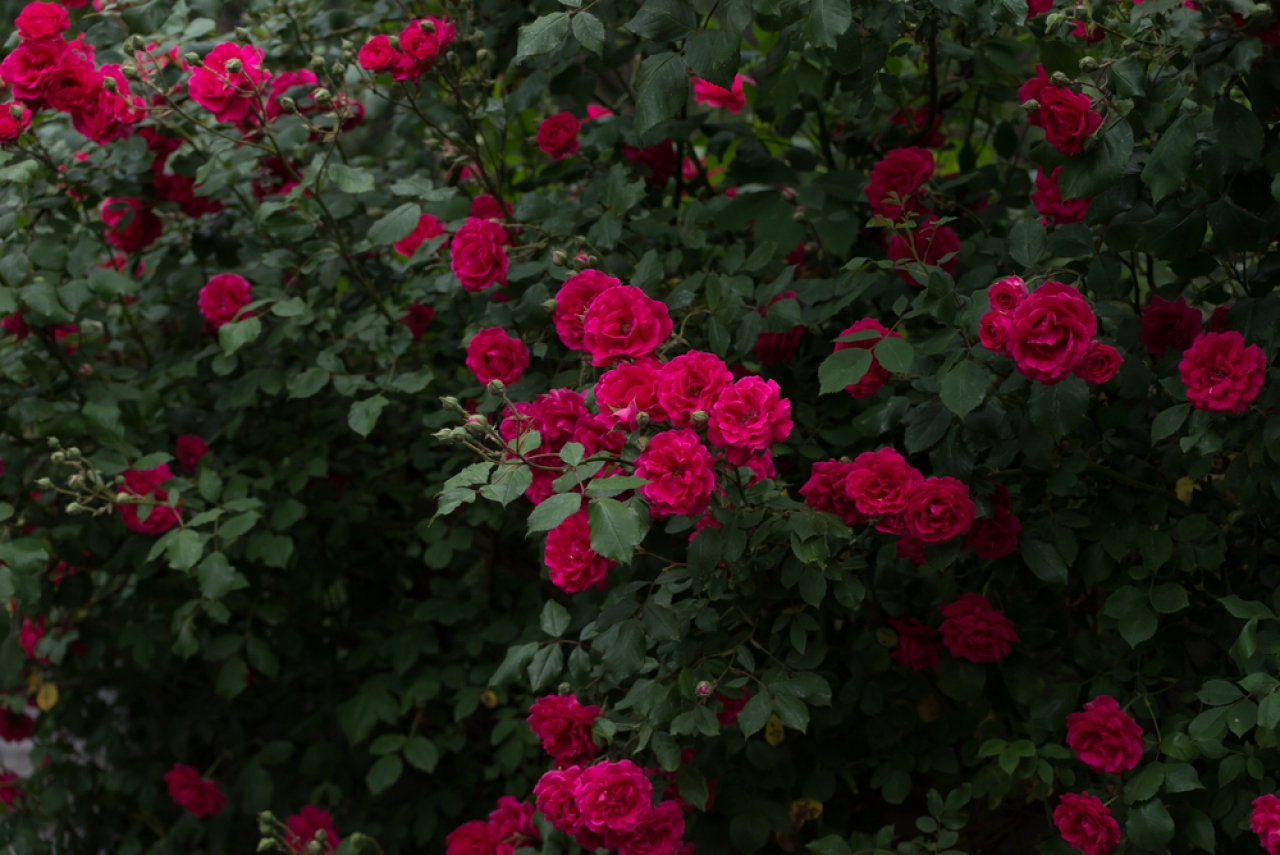 Landscaping: 10 Rose Garden Design Ideas
Michelle Slatalla April 21, 2021
There are more ways to use roses in a garden than there are roses—and as you know, there are many thousands of kinds of climbing, rambling, heirloom, floribunda, hybrid tea, and miniature roses.
Are you designing a new rose garden, reviving a neglected collection, or just trying to decide which scented climber would be the best choice for an arbor? For inspiration, we’ve rounded up 10 ways to use roses in some of our favorite gardens:
Sunken Rose Gardens
Above: Laid out in a precise grid pattern on a 6.9-acre estate in Water Mill, New York, a sunken rose garden designed by landscape architect Quincy Hammond has symmetrical planting beds defined by low boxwood hedges.
Above: In Quincy Hammond’s sunken rose garden, flower beds are lined up to mimic the spacing between apple trees in an orchard at the edge of the garden.
Rose Canopies
Above: In Sissinghurst Castle’s gardens,  Rosa mulliganii grows on a framework designed by Vita Sackville-West’s son, Nigel Nicolson.  For more, see  Required Reading: Vita Sackville-West’s Sissinghurst .
Rosarian David Austin describes the Sissinghurst specimen as a “massive rambler:  one of the biggest of all climbing roses in this country,” and it certainly dominates the space. Originally four were planted to cover the axes, but they were thinned out to just one.
See more at  10 Garden Ideas to Steal from Vita Sackville-West at Sissinghurst Castle .
Control Erosion Ramblers
Above: To cover a massive bank of excavated soil from a pond that runs in between the house at Tattenhall Hall and formal gardens and the meadow, a layer of weed-suppressing membrane was smothered with rambling roses— possibly ‘Flowering Carpet’.
“At Tattenhall Hall in Cheshire, a Jacobean manor house that sits in a picturesque English village, the line between cultivation and wilderness is finely drawn,” writes our contributor Clare Coulson. See more at  Wild Child: An Intoxicating English Garden at Tattenhall Hall .
Roses as a Refrain
Above: Photograph by Huw Morgan courtesy of Dan Pearson Studio .
At Torrecchia Vecchia (an hour’s train ride south from Rome), garden designer Dan Pearson restored 15 acres of the landscape of a 1,500-acre property on which an entire medieval village once stood. Throughout the garden, white and pale pink climbing and rambling roses envelop walls; the repetition creates unity throughout the landscape. See more at  Paradise Found: Designer Dan Pearson’s Modern Garden for a Medieval Castle .
Roses on a Budget
Above: My rose garden on a budget. Photograph by Mimi Giboin.
After a remodel laid waste to my back yard, to get rid of the mud and the dust my husband set a budget of $250. Like many post-remodelers, we were out of cash and in a state of sticker shock. I headed to Home Depot to buy some sensible shrubs, but instead came home with 16 big-box-store roses that haven’t stopped blooming since. See more of my Iceberg rose bushes, climbing New Dawn roses, and generic landscape roses labeled simply “Rose, white”  at  Landscape on a Budget: The $250 Instant Rose Garden .
English Roses
Above: Nature abhors a monoculture and sometimes a flower bed does too. At  David Austin Roses in Shropshire , England, a rainbow of colors mix in a flower bed of roses and perennials.
At David Austin’s headquarters, “each year 450,000 roses will be crossed, creating 150,000 seedlings that are initially grown in huge greenhouses before 10,000 are selected to grow on. It takes eight years, and a long process of elimination, to release new roses to the market. From those initial seedlings, around three new roses will be eventually released,” writes our contributor Clare Coulson. See more at Shopper’s Diary: David Austin Roses in Shropshire .
Cottage Garden Roses
Above: From David Austin, Rosa Gertrude Jekyll Rose (Ausboard) is $28.50 in the US and £17.50 in the UK; here is it planted alongside Epilobium and Geranium ‘Brookside’. Photograph courtesy of David Austin Roses.
In modern English cottage gardens roses engulf a trellis, rub shoulders with herbaceous perennials, and are encourage to spill over picket fences. See more in 10 Ideas to Steal from English Cottage Gardens .
Monster Roses
Above: R. ‘Kiftsgate’ in action. For more of this garden, see 10 Ideas to Steal from the Romantic Gardens at Kiftsgate Court . Photograph by Clare Coulson.
Climbing roses are an effective way to light up shaded areas.  At Kiftsgate Court in England, the famous Kiftsgate rose, planted in the 1930s, sprawls up through the trees along one side of the garden and is reputedly one of the largest roses in England.
Formal Roses
Above:: Photograph by Roe Ann White and Bill Dewey.
In Santa Barbara, California Brooklyn-based architect Roberto Sosa restored a circa-1929 Spanish Colonial house’s landscape with a light touch: the formal rose garden has clipped boxwood borders, symmetrical hedges, and a warm redbrick path. See more at  Landscape Revival: A Secluded, Historic 1920s Estate in Santa Barbara (Rose Garden Included) .
Brick Walls with Roses
Above: Photograph by Michael Garlick via Wikimedia.
“When visitors to Sissinghurst admired the endless brick walls that were trained with languorous roses, hydrangeas, and clematis, Vita Sackville-West pointed out that all houses have exterior walls that can be covered with abundant climbers,” writes our contributor Clare Coulson. “Well-trained climbers add another layer of texture to a house, as well as lush foliage and seasonal color. And if you can train scented climbers up high, then they will fragrance your bedrooms too.”
N.B.: This post is an update; it was first published June 2018.