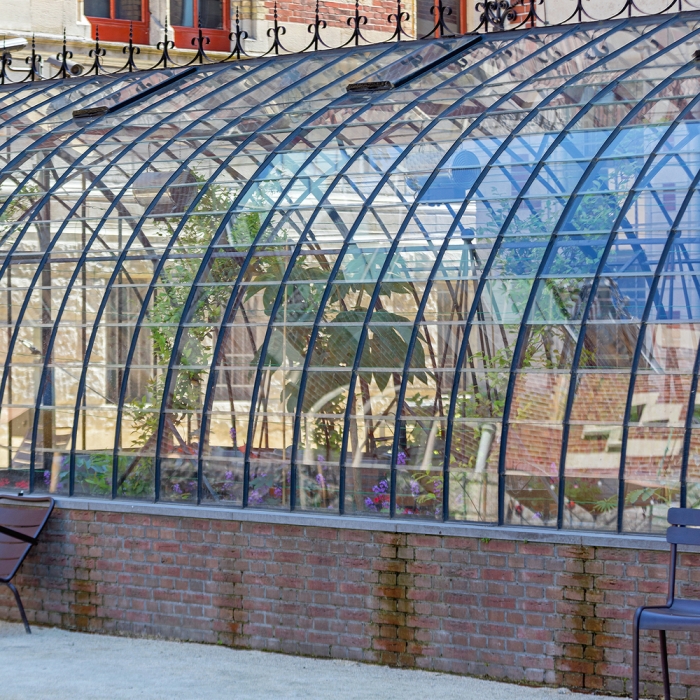 “The antiquated floor plan was not conducive to contemporary family living,” says Andrew Brewin, a founding partner at Modern Heritage, of this 1844 Colonial Revival. The family had lived in the home for over a decade before diving into the redesign.

While the owner desired a better flow and up-to-date amenities, she also aimed for an aesthetic that that would read as an homage to the home’s roots. “The client is an avid art and antiques collector with a curator’s eye and loves the home’s architecture and history,” Brewin says. “She wanted a dark, cozy kitchen that was in line with the period of the house.”

Along with reconfiguring the layout to consolidate the utility areas and expand the kitchen and breakfast room, the owners wanted a greenhouse-like place to grow plants. “What was initially a three-season room evolved into a four-season space with a pyramidical glass skylight,” says architectural designer Christopher Legere of LightWell Design, who collaborated with Brewin. “I’m proud we were able to bring her vision to light,” he quips.

The team repurposed locally sourced barnboards to conceal the structural beam they had to incorporate in order to open up the floor plan. Though more rustic in nature, the beams’ color aligns with the dark stain of the custom, quarter-sawn white oak cabinetry that Modern Heritage designed and crafted in its Scarborough, Maine, workshop.

The team created a box bay window with an integrated sill in the same honed American Mist granite as the countertops. Not only does it provide a deep ledge for plants and let in tons of light, the farm sink and window are the focal point from the pocket doors to the sunroom, with which it aligns.

It’s also a handsome feature admired from the backyard. “The box bay has a copper roof the pops off the exterior elevation beautifully,” Brewin says.

Custom built-in hutches flank the pocket doors to the sunroom on the other side of the island, directly opposite the sink, making clever use of shallow space. “They’re painted white to blend into the existing walls,” says Kelly Bushey, a project manager at Modern Heritage.

The seeded leaded glass panels, inspired by some of the client’s antique light fixtures, lend a sense of age. At the right, the mudroom leads to the yard, as well as a new pantry and laundry room.

A wet bar anchors the breakfast area which also serves as an after-school family room. “The wet bar is meant to resemble a stand-alone furniture piece,” Brewin says.

The custom-milled V-groove backsplash runs up the entire back of the piece and is visible through the seeded leaded glass panels.

The room’s existing antiques, including the 19th-century American oak table and 18th-century French buffet, inspired the species and stain color of the millwork.

The client found the Swedish copper pendant, which ties into the copper range hood in the kitchen.

The team designed a built-in desk and shelving unit with a sliding door that hides the television for the wall adjacent to the bar.

“The cabinet left of the desk wraps the back side of the chimney of the fireplace in the formal dining room,” Brewin says.

The idea to install an all-glass greenhouse in a courtyard turned into a design for an insulated room with a 14-by-eight-foot skylight that opens and closes automatically keyed off weather sensors.

“We used custom-milled nickel gap on the walls,” Bushey notes. “The bottom pieces are scribed to the tumbled-edge porcelain floor tiles so that we could eliminate baseboards.”

Granite slabs with rough edges lead from the driveway to a new deck outside the sunroom. The French doors opposite the exterior door open into the formal dining room, while glass pocket doors on the left open into the kitchen.